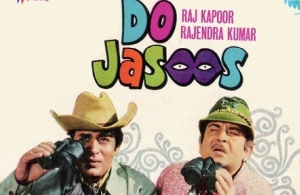 A 1975 Hindi film Do Jasoos is a comedy and mystery genre movie directed and produced by Naresh Kumar.The film stars Raj Kapoor, Rajendra Kumar, Aruna Irani,Prem Chopra, Farida Jalal and Asit Sen.The story-line of this movie revolves around two middle-aged private detectives who are on the trail of a millionaire’s missing daughter.The music is by Ravindra Jain.

Two bumbling, middle-aged private detectives, Dharamchand(Raj Kapoor) and Karamchand(Rajendra Kumar), are assigned to locate the missing daughter, Asha, of a multi-millionaire. Their adventures take them to a gangster named Prem Chopra and a criminal don named Motilal Sippy.

With a lot of skill, action, and fights, they do rescue the girl in their captivity, and bring her to her dad.It is then that they find out that the real Asha is already back home safe and sound, and they had rescued the wrong girl.But now it is too late, as the underworld and it’s men are out to get them.