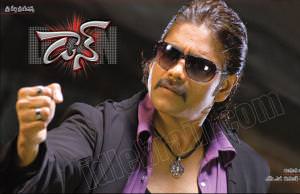 The story begins when a teen named Suri escapes and finds a drug dealer tormenting some little boys. Suri guns down the drug dealer. One of the boys, Raghava expresses his wish to join him. The rest of the boys too become Suri’s helpers and eventually his henchman.

The film continues 20 years later with Suri (Nagarjuna) and Raghava (Raghava Lawrence) and with the establishment of the fact that Suri is the Don with a golden heart. Then, of course, he has Raghava as his sidekick, who adores him to death. Together, they rule the underworld of Andhra Pradesh. Since he is the unopposed kingpin, our don even has time for a song and dance on his birthday with his basti people. Everything is peaceful and hunky dory. But only till Feroz (Kelly Dorjee) enters the scene. Feroz is a feared don throughout India and he wants to add Andhra Pradesh to his underworld fiefdom. That’s what sets off the battle of the dons.