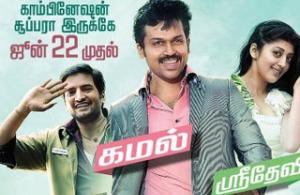 The film starts with the demise of CM (Satyamoorthy), a political plot produced by Boopathi (Prakash Raj), thereby starting the film on a serious note. Then, we are introduced to Kamalakannan (Karthi), who tells his story to the auto driver Rajini Appadurai (Santhanam). Appadurai assumes that Kamal is rich and drives him around the city to be profited for him.

Kamal is a country boy, who is working in a small company. He has come to the city to meet the concerned politicians and plead them to halt a subway project, by which he could lose his property in his village. He is the son of a humble person, who serves unlimited food to the guests and passers-by every day. Under this background, he has come to Chennai to settle the matter, as the forefather’s property is living heaven for the family.