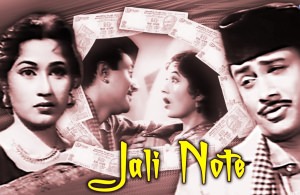 Dinesh (Dev Anand) lives a middle-class lifestyle with his mother in Bombay. On his fifth birthday his father left them never to return.

Now Inspector Dinesh has grown up, is working for the Criminal Investigations Department, and has been assigned to stop the circulation of fake currency notes. His investigations take him to Sunderdas, who is killed. He then masquerades as social worker Abdul Rashid to try to get some information from a jailed convict, Banwarilal, to no avail. Finally, he dons the disguise of wealthy Kunver Vijay Bahadur, rents a suite in Hotel Paris and befriends Manohar (Madan Puri) and several other gangsters. He gets arrested and lodged in the same cell as Banwarilal. From there the men break out and join Manohar and the rest of the gang.

It is here Dinesh will find out the king-pin behind the racket. But before he can do anything, he find himself confronting his past and will be trapped in an underwater fortress with his sweetheart, press reporter Renu (Madhubala).