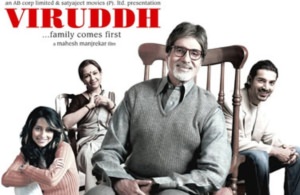 Vidyadhar Patwardhan lives a middle-class life with his wife, Sumitra. They have a son, Amar, who lives abroad in London, U.K., and it is through his income that the family lives on. Then Amar returns home with Jenny Mayer, his fiancée, and both are welcomed. Both do not look kindly upon Amar’s habit to drink. While the parents are busy preparing for a surprise birthday party for Amar, Amar gets himself killed in a fight. A devastated Vidyadhar and Sumitra arrange for his funeral, and thereafter follow-up with the police as to the conviction of the killer, who has been identified as Harshvardhan Kadam. The police version is quite different from that of Vidyadhar, and they claim that Amar and Jenny were involved in smuggling drugs, a fight ensued, and Amar was killed. Subsequently, two men are killed in a police encounter, after confessing that they had killed Amar over a fight over drugs. Then Jenny is arrested for possession of drugs and lodged in a cell. She is subsequently released, and returns home to London. The trial begins and ends with the judgment that Harshvardhan is not guilty, leaving Vidyadhar and Sumitra questioning whether Amar & Jenny were really involved in drugs, or is it all being made to appear that he was.