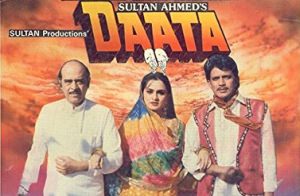 Dinanath is a school-teacher in a small town in India, and lives with his wife, Kamla; daughter, Shanti; and son Kundan. He has published a book called “Daata” in which he has made reference to all major religions of the world, and is honored for this contribution by none other than the President of India through Education Minister, Raja Suraj Singh. He arranges the marriage of Shanti to the son of Gopaldas, when Gopaldas demands dowry he is unable to afford this, and states that he has given sufficient gold and jewelery to Shanti. The gold turns out to be fake, as a result the marriage is canceled, Shanti kills herself, Dinanath dies of a heart attack. His name tarnished, no one comes forward to help Kundan or his mother. Kundan decides to avenge his father’s death by killing Gopaldas’ son, as a result he becomes a bandit, joins a band of other bandits and is on the look-out to kill Gopaldas. The question remains is this what Dinanath had foreseen for his son – a life of a bandit, and death at the hands of the police?