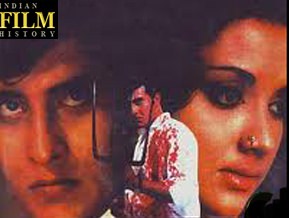 The story involves 7 criminals successfully performing a heist. Problem arises when one of them turns Gaddaar (traitor) and runs away with all the looted money. His other 6 accomplices trace him for a year and finally come to know that he is hiding in Himachal pradesh,one of the hilly states of India.The group is helped by one small time crook, Raja (played by Vinod khanna) who accidentally comes to know the secret about the heist and demands his share of the looted money in exchange for helping in tracing the traitor. As the group reaches the traitor’s hideout and confront the him, circumstances and greed leads to bloodbath, true identity and motive of Raja is also revealed.