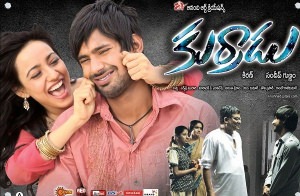 This movie is a remake of Tamil movie Polladavan. Varun (Varun Sandesh), the son of a middle-class man (Tanikella Bharani), is fit for nothing in the beginning. Though he wants to do something with his life, he knows he cannot get a job, just as he could not get a costly education, as his father is not someone who can bribe Rich men for a job to his son. On the night of his birthday, he spills out his frustration to his father who beats him for consuming liquor. Life changes for the good the next morning, when Varun’s father gives away the sum he has saved for the daughter’s wedding to Varun. The lad, who has been dreaming of owning a bike, gets one and whizzes off in life. A lucky talisman for him, he develops an emotional attachment to it as he sees it as the reason for his upward mobility. After it entered his life, he has got everything he had desired – father’s affection, a job and Hema’s (Neha Sharma) love for which he has been thirsting for two years now.