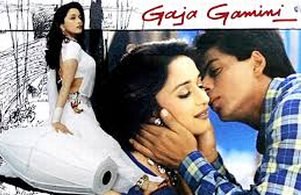 The central figure of the film is represented by a mysterious figure called “Gaja Gamini” (Madhuri Dixit), who inspires, arouses, and confuses the common man. “Gaja Gamini” is the inspiration behind Leonardo da Vinci’s (Naseeruddin Shah) ‘Mona Lisa’, Kalidas’ poem “Shakuntala”, and a photojournalist named Shahrukh’s (Shah Rukh Khan) photographs. The mysterious “Gaja Gamini” appears as four characters, one of them being Sangeeta, a blind girl from Banaras at the beginning of time, who inspires village women (Farida Jalal, Shilpa Shirodkar, and Shabana Aazmi) to revolt against a male-dominated system and carve a niche for women forever.