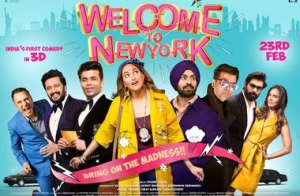 The movie is about a sloppy recovery agent Teji (Diljit Dosanjh) who dreams of being an actor and a ‘dhinchaak designer’ Jinal (Sonakshi Sinha) who wants to escape from her dreary life. They win a contest and are selected to showcase their talent at the IIFA Awards by Sophie (Lara Dutta) who is a part of the organising team spear headed by Gary (Boman Irani). Sophie purposely selects the ‘two losers’ Teji and Jinal in order to settle scores with her Gary, who refuses her partnership in the company. The entire film is supposed to be a comedy of errors with both Teji and Jinal winning Bollywood fraternity’s hearts with their genuine talent. What it turns out to be is a whole different story. In between all this is the main celebrity host of the show Karan Johar, who has his own set of issues with the organiser Gary. But at the same time, Karan is also under threat of being kidnapped by his lookalike NY based gangster Arjun (Karan Johar) who wants to punish him for making romantic films. Riteish Deshmukh, who is the co-host of the show, uses this situation to his own selfish benefit. In between all this chaos behind the scene, IIFA awards take place in New York.