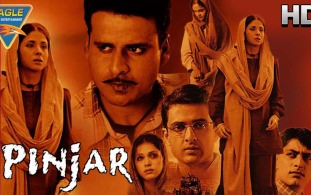 “Pinjar” is set in the time of the 1947 partition. Puro is a young woman of Hindu background, who lives a happy, comfortable life with her family. She is engaged to a wealthy, kind young man, Ramchand, who is from a promising family. While on an outing with her younger sister Rajjo, Puro is suddenly kidnapped by a mysterious man, Rashid. Rashid’s family has an ancestral dispute with Puro’s family. In the past, Puro’s family had made Rashid’s family homeless by taking over their property. Puro’s grand-uncle had even kidnapped Rashid’s grand-aunt and then released her after defiling her. The task of exacting revenge is given to Rashid, and his family tells him to kidnap Puro, in order to settle the score.