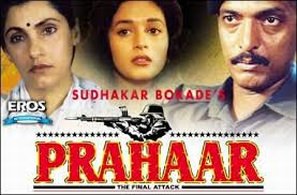 Prahaar is the story of Major Chavan, a tough and stern soldier, trained to destroy the enemy. He can see the enemy on our borders but is unaware of the invisible enemy within ourselves. When one of Major’s Commandos – Peter D’Souza is killed, he is shown the harsh reality revolving around us, the enemy is within ourselves. The battlefield changes and Major Chavan makes his final attack on the enemy within this crumbling society.

The movie in itself it phenomenal. The credible footage of commando training is awesome – and seeing Nana himself do some of the scenes seems unbelievable.

The final 15 minutes of the movie are to die for. His dialogue delivery is superb – as one might come to expect from a stalwart like Nana.