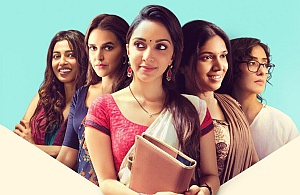 Lust Stories – a Netflix film directed by Zoya Akhtar, Dibakar Banerjee, Karan Johar and Anurag Kashyap – features ladies who stubbornly and strikingly hold the reins. There is a teacher coercing her student to confess his consent on tape, there is a cheating wife who liberates herself by spilling the secrets weighing her down, and there is a librarian who proudly owns her cleavage and the stares directed its way.

Five years ago, these directors got together to make Bombay Talkies – four films with cinema as the theme – and the band seems better tuned to this format now, with each film better contained within itself as well as better suited to the others. They may have been crafted independent of each other, but the films sit rather assuredly on the same shelf. The films belie the tawdriness of the title, and instead of lust itself, each director focusses on something that is born from it.