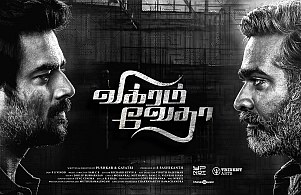 A badass cop Vikram leads a special task force formed to eliminate a kickass Vedha’s gang running amok on the streets of Chennai, making a mockery of Law and Order. An encounter planned by a Vikram’s friend Simon, kills Vedha’s trusted aides and brings him out of hiding. Vedha lays his clutch on Vikram and engages in a disturbing mind game of sorts which results in a quest to reveal the truth behind that fateful encounter.

Vikram Vedha opened to positive critical reviews, with praise for its direction, story, screenplay, cinematography, and the performances of Madhavan and Sethupathi.Writing for The Indian Express, Manoj Kumar R rated the film four out of five stars labelling it as “by far the best film to release in Tamil this year so far”. He further said that while both Madhavan and Sethupathi “have competed with each other” in providing performances that were “intense and convincing”, it was Sethupathi who “manages to draw the applause and whistles from the audience for his natural performance.