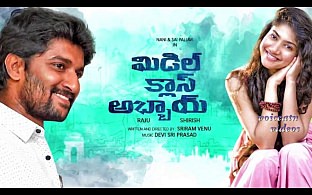 A middle class boy Nani (Nani) with a photographic memory stays at his uncle’s (Naresh) house at Hyderabad. One day, when he was forced by them to return to his brother’s (Rajiv Kanakala) house, he refuses as he dislikes his sister-in-law Jyothi (Bhumika Chawla) who works at Regional Transport Office (RTO). He is again forced to move to Warangal with his sister-in-law because of her transfer. She asks him to do all the house-hold work and he keeps sharing his woes with his aunt.

There, he meets a woman named Pallavi (Sai Pallavi) aka Chinni at the bus stop. He is shocked when Pallavi proposes him at first sight. After meeting a few times, they start dating. Nani soon comes to know that Pallavi is his Jyothi’s cousin after she comes to live with them and he also comes to know that she had fallen for him four years ago, during his brother’s wedding. They continue to meet secretly, until Jyothi finds this out and sends her away from him so that he concentrates on his career.