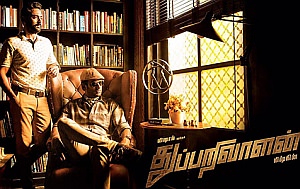 The film starts with Dhiwakar, a software engineer (Vincent Asokan), his wife, his son, and his daughter, celebrating his birthday on the rooftop of his apartment. A sudden lightning strike kills him and his son. His wife (Simran), Mrs Dhivakar and his daughter watch in horror, as they are burnt to death. At a movie theatre, a man gropes a woman and a small commotion ensues, which was stopped by an ACP Paul Dhanarajan, who later dies in the middle of a police conference. The movie shifts to Detective Kaniyan Poongundran (Vishal), who lives with his friend and colleague, Manohar (Prasanna) is furious that he does not have a case worthy of his mettle. Later, Kaniyan and Manohar come across Mallika (Anu Emmanuel), who is forced into pick-pocketing by her uncle (Ravi Mariya), who is an alcoholic. Kaniyan intimidates her uncle, causing him to reform all of a sudden and offers her a job.