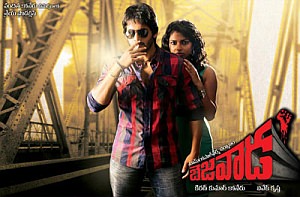 Kali Prasad aka Kali (Prabhu) is the man of masses in Bejawada. His group has a stronghold on temple city. Vijay Krishna (Mukul Dev) is right hand to Kali. Kali’s brother Shankar Prasad aka Shankar (Abhimanyu Singh) does not like the supremacy of Vijay Krishna. Due to this personal grudge, Shankar plays spoil sport of brutally killing his brother Kali and then spreads the rumor in Bejawada about Vijay Krishna as man behind this murder. With the help of politician Ramana (Kota Srinivasa Rao), Shankar plans to become a politician but fails due to Vijay Krishna’s authority on Student and Labor Unions. Vijay Krishna has two brothers Jaya Krishna (Ajay) and Siva Krishna (Naga Chaitanya).