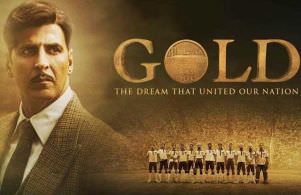 GOLD is a story of India’s first big win in an international sports tournament after attaining independence. Tapan Das (Akshay Kumar) is the junior manager during the 1936 Berlin Olympics for the British Indian hockey team. British India defeated Germany quite easily and won the gold medal. Since India then was still under the British rule, the British national anthem was played at the end of the match. Tapan feels humiliated and he vows to help a free India win the Olympics and then stand proudly as Jana Gana Mana will be played. Sadly the World War 2 begins soon enough and the 1940 and 1944 editions of the Olympics get cancelled. In 1945, the war ends and in 1946, it is announced that the 1948 Olympics will take place in London. The independence of India is also near. Tapan by now has become an alcoholic and owes a lot of money to many.