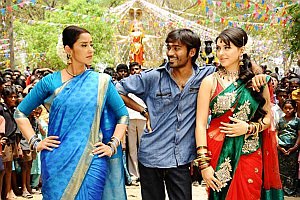 Saravanan (Dhanush) is a do-gooder who is soft-spoken and admired by one and all. Child Chinna (Vivek) is the head of the Namitha Fan Club in his area. The two come across Gayathri (Hansika Motwani), the daughter of arrogant businesswoman Rajeshwari (Manisha Koirala). Chinna falls for her, so he tries several plans to get close to her but in vain. Gayathri falls for Saravanan after he saved her from an accident.

Coming to know of their affair, Rajeshwari decides to get them both married. The reason is that she is keen on getting a son-in-lawn who will always do what she wants and be under her control.