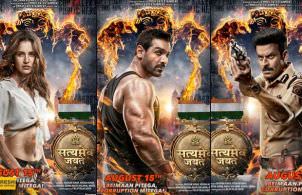 SATYAMEVA JAYATE is the story of a vigilante on a killing spree for a personal reason. Veer (John Abraham) is an acclaimed artist who has taken up a mission to kill corrupt cops. His first target is Sadashiv Patil (Abhishek Khandekar). He sets him on fire alive and then sends his ashes to his police station in Santacruz, Mumbai. In no time, he bumps off Inspector Irrfan Qadri (Shaikh Sami Usman) from Andheri Police Station in the same manner. DCP Shivansh Rathod (Manoj Bajpayee) is given the charge of this case by the Commissioner (Manish Chaudhary). Veer meanwhile meets Shikha (Aisha Sharma) at a beach clean-up drive and both fall for each other. Meanwhile, Veer challenges Shivansh to stop him from killing his next target. Shivansh fails and Veer manages to eliminate Inspector Damle (Ganesh Yadav) of Thane Police Station. Shivansh is shaken by Veer’s audacity and his fearlessness and he goes on an overdrive in trying to know who his next target would be. Finally, Shivansh cracks the modus operandi of Veer. Shivansh realizes that Inspector Bhonsle (Rajesh Khera) from Yari Road police station is the next one in line. Shivansh lays a trap and is all set to catch Veer. What happens next forms the rest of the film.