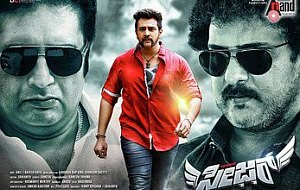 Seizer (Chiranjeevi Sarja) who repossesses vehicles for a financier (Ravichandran) when the owners default on their loans. Along the way, Seizer tangles with a big-time gangster (Prakash Raj) who can’t take the affront to his reputation from such a small-timer and vows revenge. But there are also other gangsters getting murdered along the way. Is it just coincidence that has brought these figures together or is there more to the story?

For the first time, Crazy Star V. Ravichandran will be seen alongside Yuva Samrat Chiranjeevi Sarja. Touted to be an out and out action entertainer, Seizer, assures to be perfect cat and mouse fight between protagonists and a powerful antagonist.