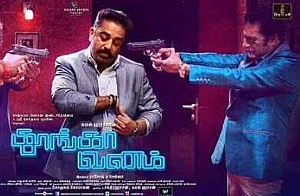 The film begins with Diwakar (Kamal Haasan), an Indian Revenue Service officer in the Narcotics Control Bureau, and his deputy Mani (Yugi Sethu), busting a narcotics scam. In retribution, Vittal Rao (Prakash Raj), a drug smuggler who had masterminded the scam, kidnaps Diwakar’s son Vasu (Aman Abdullah). He is willing to release Vasu if Diwakar can return to him a bag of cocaine he seized while thwarting the scam. Without any options, Diwakar agrees and proceeds to Vittal’s nightclub where Vasu is held hostage with the bag of cocaine, hiding it in the men’s toilet. However, this is noticed by his colleague Mallika (Trisha), who becomes suspicious and thinking that Diwakar is involved in drug smuggling, informs her superior Dhiraviyam (Kishore). Both begin to pursue Diwakar, taking away the bag of cocaine from the toilet in the process.