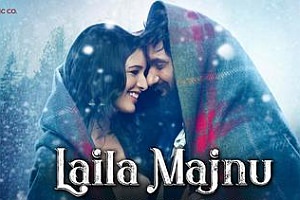 LAILA MAJNU is the story of two lovers who are not destined to be together. Laila (Tripti Dimri) is a young girl in Srinagar who’s a flirt and likes attention from guys. One day she bumps into Kaes (Avinash Tripathy), a Casanova who has just returned from London. Laila at first is repulsed with Kaes’s stalking but slowly she falls for him. Both start dreaming of a future together. However, things aren’t going to be easy. Laila’s father Masool (Parmeet Sethi) is in a feud with Kaes’s father Ghulam Sarwar Bhat (Benjamin Gilani) with the former alleging that the latter took away his land by fraudulent means and built a five star hotel. Hence, the fathers of both Laila and Kaes get livid on finding out about their love affair. At the insistence of Kaes, Ghulam goes to meet Masool to ask Laila’s hand in marriage. Masool however humiliates him. A war of words ensues between the two. Masool decides to get Laila to Ibban (Sumeet Kaul), his trusted protégé. Kaes tries to find a way to stop this marriage. But when he’s not able to find any, he lands up at the wedding. He begs Masool to stop the marriage and when the latter doesn’t agree, Kaes insults him. Laila gets angry and asks him to leave. Kaes goes away in anger. What happens next forms the rest of the film.