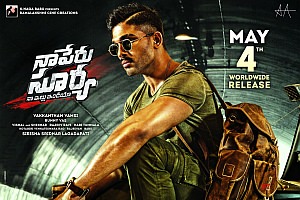 Surya (Allu Arjun) is an aggressive soldier in the Indian Army, who suffers from anger management issues and dreams of being posted at the LOC. After getting into a brawl at a local club and attacking Inspector Pradeep Negi (Ravi Kale) and stealing the latter’s gun, Surya uses it to shoot dead a terrorist right when the officer comes to ask for his gun from Surya’s senior, Col. Sanjay Shrivastav (Boman Irani). After being court martialled for indisciplinary action, Surya’s godfather (Rao Ramesh), requests the Colonel to give Surya a final chance, the Colonel agrees on the condition that Surya gets a signature of approval from the country’s top psychologist and the Dean of the Institution of Psychology and Foreign Languages, Dr. Ramakrishna Raju (Arjun Sarja), who happens to be Surya’s estranged father.