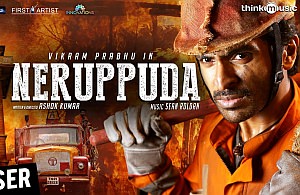 Guru, Patta, Dhana, Parthi, and Seenu are five childhood friends, who live in the same area in from Chennai, Tamil Nadu, India. Their main aim is to join in the Fire Service and save lives. So, till they get their jobs, they go around places dousing off fires and saving lives by themselves. Their actions are praised by the public and the concerned officials, including the Zonal Fire Officer, Narayanamoorthy, who promises them that they will get their jobs, if they write and pass the exam, that is needed for them to join the fire service soon.

On the night before the exam, Dhana meets his friends and he is seen to be injured. He tells them that while he was coming back home after seeing his sister, he was stopped by a man named Sadha and his friend and was slapped without any reason. Dhana tries to move on from there, but Sadha doesn’t allow him and repeatedly assaults him. Sadha tells his friend that he is a don and he is unstoppable.