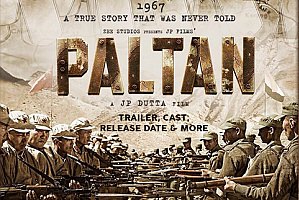 PALTAN tells the story of a military clash between India and China in 1967. This is a time when the state of Sikkim isn’t a part of India. China wants to capture it by hook or by crook for strategic reasons but due to international pressure, they can’t make their intentions public. Yet, at Nathu La border in Sikkim, they keep engaging in minor skirmishes to scare the Indian forces which are stationed there after the king of Sikkim granted them permission. Maj. Gen. Sagat Singh (Jackie Shroff) appoints Lt. Col. Rai Singh Yadav (Arjun Rampal) as the in charge of Nathu La. Rai has undergone training in London and is well versed with Chinese tactics. Some of the officers under him at Nathu La are Major Bishen Singh (Sonu Sood), Captain Prithvi Singh Dagar (Gurmeet Choudhary), Major Harbhajan Singh (Harshvardhan Rane), 2 Lt. Attar Singh (Luv Sinha), Hawaldar Lakshmi Chand (Abhilash Chaudhary) etc. Frustrated with the constant harassment by Chinese, Rai recommends that a permanent fence be laid down dividing the Indian and Chinese border. This would stop the regular fights between the forces of both countries over where exactly the border line is. Work on the fencing begins on the Indian side and it rattles the Chinese as this would put their plan of capturing Sikkim in jeopardy. With no other option in hand, the Chinese forces open fire and a war breaks out between the two countries. What happens next forms the rest of the film.