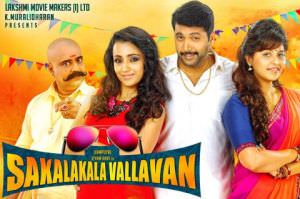 Shakthi (Jayam Ravi) and Chinnasamy (Soori) are family enemies who fight over an election. During that time, Shakthi falls in love with Anjali (Anjali), whom he later discovers is his enemy’s cousin. When their love rapidly heats up, Shakthi is forced to marry Divya (Trisha), a city girl.

Before starting a life together, Divya tells Shakthi they must get to know each other, but every time Shakthi tries to do something good, it ends bad. This leads them on a plan for divorce. In exchange, Shakthi tells Divya to agree and stay for a month with his parents so they won’t get hurt over the fact that they made Shakthi marry someone who doesn’t even like him. To make this worse, Shakthi’s father (Prabhu) gets Divya to stand for the female election to which she quietly agrees. When she loses in the family generation winning election, Shakthi’s father angrily hits him.