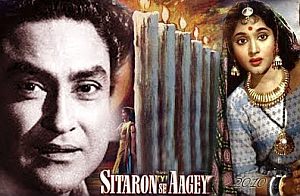 “Even if there is a story, a film must ultimately be a musical extravaganza.” That is the keynote of the Hindi films produced in Madras and “Sitaron Se Aagey” is no exception.

But, while many such films present no excuse for dragging song and dance into the story, the makers of this film at least had the grace to do so. The film has for its background a theater which provides an excellent opportunity to introduce Vyjayanthimala’s dances and S. D. Burman’s songs.

However, it is quite a third person who steals the picture from so formidable a duo. It is Ashok Kumar who plays the pivotal role.

The main drawback of this lavish production, apart from the fact that it is reminiscent of “A Star Is Born” and “Pygmalion,” is that it has suffered from the “re-writing.”

The unknown actress and the actor-director who shapes her into a star seem to drift apart for very flimsy reasons. A conflict is supposed to develop between them, but-it is ill-defined.