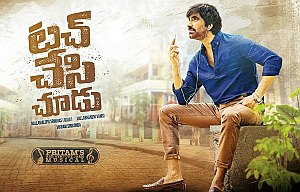 Kartikeya (Ravi Teja) is an owner of Kartikeya Industries. He looks after his family very well. His philosophy is “family is most important”. They live in Pondicherry which is the largest city of the Indian union territory. There is a goon named Selvam who robs Kartikeya’s machinery often. Kartikeya’s repeated complaints fall on deaf ear. So Karthikeya challenges that he can solve the case in 2 minutes, so the CI makes him CI for one day to fight Selvam. Kartikeya falls in love with a Choreographer named Pushpa (Raashi Khanna) after few silly talks and fights.

One day after Irfan Lala (Freddy Daruwala) kills a student activist in a pub, Kartikeya’s sister secretly watches it. She tells it to her brother. So Kartikeya informs this to police based on the picture of the criminal. So the police officer (Ajay) scolds Kartikeya that the criminal died long back ago. On the road suddenly Kartikeya watches Irfan going on road. He chases after him but the criminal gets missed.