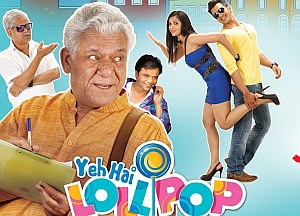 Yeh Hai Lollipop, the title bearing no semblance to anything in the movie, is a mall-film which is a decade too late, considering the mall boom is not a new thing in India. A producer looking to avoid the tax man needs a flop film and hires the services of Masoom (Om Puri), a failed writer who works out of a food court at the local mall. The money is good, so he agrees to write and weaves the story around the characters he sees in the mall/ office. There is the Chaplinesque eve-teaser (Rajpal Yadav), the serial polygamist (Tiku Talsania), the hero who is also a salesman in the mall (Chirag Thakkar) and his heroine, the food court head (Shilpa Anand). There’s also a weirdo (Sanjay Mishra), who keeps a bunch of official ID cards and butts into people’s lives.