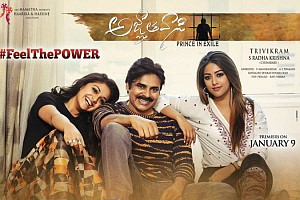 Vindha Bhargav (Boman Irani), a rich tycoon from India, receives the news of his son Mohan Bhargav’s death in a car accident while he is in Italy. Later, armed gunmen enter his hotel room, one of whom holds up a phone, and on the other end are Vindha’s friends Sharma (Murali Sharma) and Varma (Rao Ramesh), who tell him this was their plan all along, and now with his son dead as well (implying that they planned it), his “empire” has no heir. Vindha secretly records this conversation before being gunned to death by the gunmen.

The news of Vindha’s death, along with his belongings, reaches his wife Indrani Bhargav (Kushboo) who hears the audio file of Vindha’s alleged killers. She calls her brother Appaji (Tanikella Bharani) to call for an unknown person. Appaji informs the unknown person, who is none other than Abhishikth Bhargav (Pawan Kalyan), Vindha’s “secret” son. After performing his father’s last rites in Varanasi, Abhi makes his way to Hyderabad, where his father’s possible killers live.