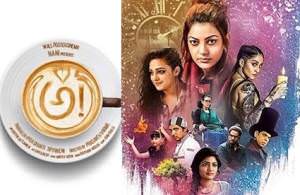 Radha (Eesha Rebba) and her partner Krishnaveni (Nithya Menen) are a couple trying to convince the former’s parents to give their blessings to the union. Nala (Priyadarshi) is a man who’s down on luck and pretending to be a chef so he can gain some meaningful employment. He befriends a goldfish named Nani (Nani) and a bonsai tree named Chanti (Ravi Teja) in the kitchen. Shiva (Srinivas Avasarala) is a watchman who wants to be a scientist and invent a time machine, while Parvathy (Devadarshini) claims him and her are two sides to the same person. Moksha is a little kid working at her mother’s restaurant and engaged in a cold war with an egoistic magician Yogi (Murli Sharma). Meera (Regina Cassandra) is a waitress and drug addict, gearing up to loot a rich man with her boyfriend. And last but not the least, Kali (Kajal Aggarwal) is a troubled woman who decides to kill herself and commit a mass murder on her birthday. What’s the connecting link between all these characters forms the crux of this ingenious tale.