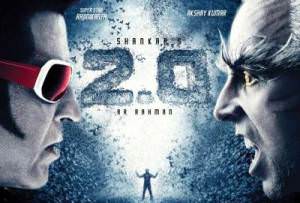 2.0 is the story of an evil force wreaking havoc and how a robot is awakened to fight him. Dr. Vasigaran (Rajinikanth) has progressed in his field and is trying to promote the importance of robots. He has developed an attractive robot named Neela (Amy Jackson) which can do any domestic work. Meanwhile, a strange phenomenon begins to occur in the city. The mobile phones of every citizen gets zapped into the air and disappears, creating chaos. After the head of a mobile phone company Manoj Lulla (Kaizaad Kotwal), a wholesale retailer of cell phones and a prominent leader R S Vairamoorthy are killed by this evil force that can even take the shape of a giant bird, Dr. Vasigaran requests the government that he be allowed to reactivate Chitti the robot. However, Dhinendra Bora (Sudhanshu Pandey) objects since it had led to immense destruction the last time. But with no other option in hand, home minister Vijay Kumar (Adil Hussain) grants Dr. Vasigaran the permission. Chitti is brought back to life and gives a tough fight to the evil force. But soon even Chitti is unable to do much. The evil force, who is none other than Dr. Pakshirajan (Akshay Kumar), has a dark past and is too powerful. He won’t rest until he achieves his objective. What happens next forms the rest of the film.