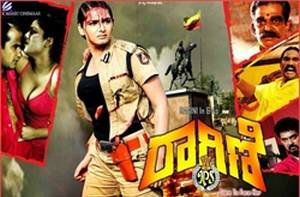 The film tells the story about a strict IPS officer, Ragini (Dwivedi), who aims to rid the society of goons and corrupt politicians, and also ensure that women lead a safe and decent life. In the process she gets raped by the goons as a revenge against her by brutally assaulting her by using their call girl women as bait as complaintee. Her name gets spoiled in Police Department and how she take revenge against the goons forms the crux of the story.

Directed by Anand P. Raju and produced by K. Manju. It stars Ragini Dwivedi in the lead role and was the first Kannada film to be named after an actress.Avinash, Kavita Radheshyam and Narayanaswamy appear in supporting roles.

Upon theatrical release on 28 March 2014, the film received positive to mixed reviews from critics, with Dwivedi’s performance receiving praise.