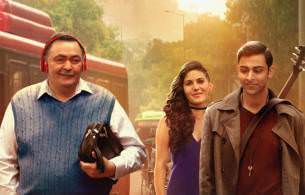 A father-son relationship is a complicated one where building the bridges back takes a lot longer than burning them. Rajma Chawal seeks to explore the depths of such a relationship where the father and son try to understand each other.

The drama, with shoots of comic relief here and there, feels like a fake embodiment of everything it wants to be. Other than a fresh performance by Amyra Dastur as a woman with a hurtful past, there is nothing else that does not look convoluted. From the pretentious title because the movie is set in the modern day Chandni Chowk to a weak performance by the lead actor to cliched elements; these things take up most of the screen time in Rajma Chawal. You enter the hall and in the first five minutes you know what is going to happen with the characters and how they are going to end up. Blame it on Vivek Anchaliya’s formulaic writing but Rajma Chawal felt like not much research was done on the audience and their intelligence. It’s a rehash of all those father-son dramas you have seen in Bollywood over the last couple of years and definitely not worth your time.