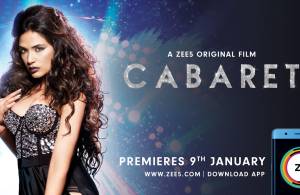 In Cabaret, Chadha plays a famous dancer named Rosa, who tries hard to escape her past – that of killing villainous-looking men like Vipin Sharma and Gulshan Grover – when she isn’t busy asserting her overcooked vulnerability on the drunken journalist. Or when she isn’t wearing ridiculous corsets that were discarded from the sets of Moulin Rouge for looking too kitschy. For the first 30 minutes, she thinks she is a slurring Kangana Ranaut character from her pre-Queen days (drink, dance, cry, repeat), and the film thinks that a dancer with links to the underworld is a story that resurrects a depressed writer from his literary grave. He isn’t very good at his job, given that he not only falls in love with his subject (of course, because she needs help) but also begins his interview with questions that range from “Do you like the night?” and “Do you fear death?” to “Do you believe in God?”. Her answer: Yes, because I believe in love. They then proceed to chew on each other’s lips – as opposed to kiss them – to depict undying lust in a dead film. Pooja Bhatt is one of the producers, which is probably why this looks like a steamy Emraan Hashmi entertainer gone dreadfully wrong.