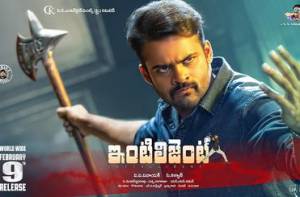 Dharam Tej (Sai Dharam Tej) is a software engineer who is very loyal to his company and its MD, Nandha Kishore (Nassar). As time passes by, a criminal gang lands in Hyderabad and tries to overtake the company. In this process, Nandha Kishore gets killed and to make things better, Dharma Teja kills the villain’s brother and injures his henchmen brutally and takes on a new identity of Dharma Bhai.

Inttelligent is let down by routine story and average direction. Lackluster music and not very good production values marred the decent work by the actors. The first half of the film is above average in entertainment, and the interval bang is okay in effect. Few comedy scenes and Sai Dharam Tej remain the sole highlights of Inttelligent. Only hero cannot make a film hit and other departments have to be in sync. Inttelligent disappoints the star, his fans and movie lovers with its no novelty factor.