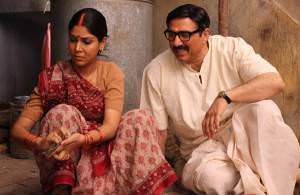 An idealist Sanskrit teacher deals with issues like commercialisation of religion as things around him change and he struggles to keep up. But is he ready to pay the price?

Made around the politically charged topic of Ram Janmabhoomi, ‘Mohalla Assi’ was delayed for six years before it could be released. But when you see the film, there is literally no reason for that to have happened. But it may have helped the film considering the Ram Temple issue has heated up again and more people will be curious to know just what is in the film. The thing is, they will be disappointed considering there is very little that will either tell you more on the subject, let alone hold your interest.