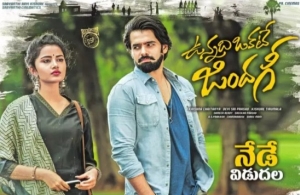 The story starts in Milan, Italy where Abhi remembers his friends. The story revolves around five childhood friends Abhi (Ram Pothineni), Vasu (Sree Vishnu), Sai (Kireeti Damaraju), Satish (Priyadarshi Pullikonda) and Koushik (Koushik Rachapudi). Abhi and Vasu are best friends among them. Abhi’s mother dies in his childhood and his father (Anand) brings him up. He’s always unhappy on her death anniversary. When Vasu becomes his friend, he feels that there is no need of a mother with a friend like him. Things change when Abhi and Vasu fall in love with the same girl, Mahalakshmi a.k.a Maha (Anupama Parameswaran) who is studying medicine. After knowing that she is a classical singer, Abhi gives her a chance to sing in his band after observing her voice and encourages her to perform in the programme. But when both reveal that their love for the same girl, they decide to ask her whom she loves. And she reveals that she loves Vasu. But Abhi doesn’t mind as he is a happy-go-lucky guy. Vasu begins to spend more time with Maha and starts ignoring Abhi. This starts a fight between them and Vasu says that priorities change with time and this time Maha is his priority. After hearing this Abhi gets hurt and leaves to Milan without telling anyone.