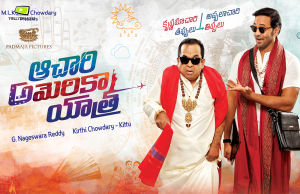 A group of Pandits, headed by Appalacharya (Brahmanandam).and his lieutenant Krishnamacharya (Vishnu Manchu) find themselves with a target on their back as a powerful family finds them responsible for killing their father (Kota Srinivas Rao) by performing a homam (a sacred ritual). On the run from these goons, who throw bombs at will in broad daylight, the pandits flee to America. While Appalacharya is against going to the US, he’s convinced by Krishnamacharya with the promise of marriage and a job as head priest. It’s only later that he finds out that they had gone to America so that Krishnamacharya can meet his true love Renuka (Pragya Jaiswal) and rescue her from marrying against her will. There’s a twist in the tale when they realise Renuka is also the granddaughter of the man they are accused of killing.