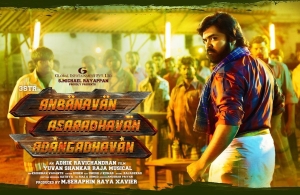 In Dubai, a cop named Ruby interrogates an old man in an attempt to capture the dreaded don Michael. The man narrates Michael’s story.

Back in the 1980s, in Madurai, Tamil Nadu, Madura Michael is a notorious thug who works for a smuggler named Senthamarai and kills for money. He spends his time with his sidekicks played by Mahat and VTV Ganesh. Michael falls for Selvi, a girl from his town. Selvi rejects him initially, but later reciprocates his love. She asks him to leave his gangster life and move to Dubai, starting a new life. Michael half-heartedly accepts this. However, an enemy from the same gang backstabs Michael by turning into a witness for many murders committed by Michael and the latter is jail.