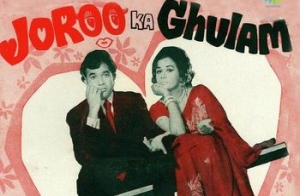 Kalpana, the daughter of Shyamlal is brought up in the lap of wealth and luxury. As an University student she falls in love with a struggling artist, Rajesh. When news arrives back home of this improbable romance her dad arranges a marriage with a wealthy man. Unwilling, Kalpana runs away from home and moves in with Rajesh. Incensed, Shyamlal disowns and disinherits Kalpana. Living with Rajesh, in straitened circumstances Kalpana maintains a correspondence with her mother. Shyamlal maintains his position doggedly that Rajesh is only after his wealth and does not truly love his foolish daughter. Piqued, Kalpana constructs a fantasy tale of Rajesh’s financial success and the wonderful and opulent lifestyle she enjoys. All is well till she announces the birth of her son. Now, eager, willing and transformed by love for his newborn grandson he announces that he will visit his daughter. Thrown into a quandary, Kalpana casts about for a solution founded on deceit. The arrival of Shyamlal and his wife sets off a pyramid of lies, where to avoid the consequences of one lie, Kalpana is enmeshed in a web of lies. Now enters the wicked cousin, who hopes to inherit the considerable wealth of Shyamlal, whose designs are thwarted by the new arrival. He is willing to avoid disinheritance at any cost. The denouement comes when the baby is under threat, and the facade that Kalpana so carefully crafted evaporates after many comical scenes.