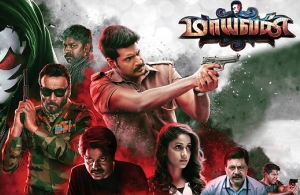 The murders happening in the city which had similar gestures, perplexed the Police authorities.Inspector Kumaran (Sundeep Kishan) who himself witnessed one of the ‘near-live-murder’ had trauma after that ,which got mixed with an accident occurred in his young age.The people who were murdered , Dr.Pramodh;a Scientist,his gym trainer,an actress,her makeup man and the rest to follow were part of some mysterious web whom the Police needs to sort out to solve the case.

‘Maayavan’,a variety murder mystery movie following the way of super-natural,sci-fi movie is an experimental attempt in Tamil cinema.Especially,considering it an Indian regional language movie,there were many chances for it to commit to the compromises.Instead,the emphasis is given to the story structure,which made it a good watch.The first half mainly concentrated on the character formation of Inspector Kumaran,his life and fears without giving any clue on what was happening around.Later,when the mystery was revealed,the story became fast-paced with thrilling sequences.The super-natural,sci-fi elements which formed the major part of the movie had chances to flaw in a big way.But the debutant C V Kumar,with his team was able to make-believe those scenes in a perfect way. Especially,the way in which the 2037 scene at the start which connected the dots towards the climax was worth to watch.The cameo from Jackie Shroff really made the climax a lot powerful than it would have been.