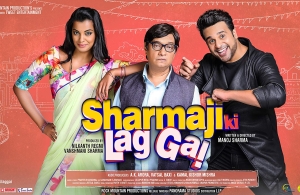 Professor Sharmaji (Brijendra Kala) is quite a prude, but happens to be the sex columnist of ‘Jhunjhuna Samachar’, a weekly newspaper owned by the wealthy and influential Murli (Krishna Abhishek). Things stir up when Sharmaji’s pretty wife Shobha (Mugdha Godse) is eve-teased by Lallan (Hemant Pandey), who manages to cause marital troubles despite being behind bars.

‘Sharma Ji Ki Lag Gai’ sheds light on the marital issues of a sexpert. And placing all their bets on this ironic plot were its filmmakers, who seemed to have neglected the script entirely. Although the proficient actors tried to add some flavour to most of the redundant scenes, they were often guilty of overplaying their part.