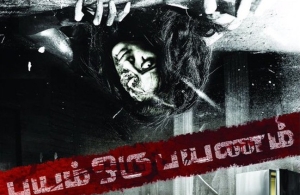 The film opens as the child of a photo journalist Ram (Bharath Reddy) has a nightmare of his father’s car meeting with a terrible accident and the very next day he has to go alone to a forest to shoot some pictures. A broker Kavariman (Singampuli) guides Ram to a deserted bungalow whose watchman Yogi Babu lets them in for a bribe and some liquor. Well past midnight inside the house Ram finds a memory card and in it there are pictures of a girl in a compromising position whom he recognizes and calls one of his friends in Chennai and tries to email them but fails. Thereafter he undergoes a scary time as a hideous woman appears in the bathroom, the fridge and his bedroom causing him to panic and leave the house. Driving his car all through the way he gets into one scary situation after the other and finally finds out why the ghost is after him but only after a great personal tragedy.