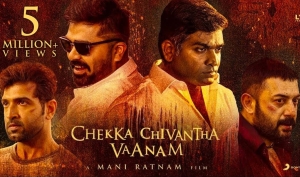 Senapathi (Prakash Raj), a God-fearing boss of a crime family, is on a tour to a temple with his wife Lakshmi (Jayasudha). Despite being escorted by heavily armed men, assassins disguised as cops attempt to take down Sena and Lakshmi, but they evade the assault. Sena’s children are notified of this. Sena has a daughter (RJ Sindhu) and three sons. The eldest of the sons is Varadharajan (Arvind Swami), who runs a part of his empire in Chennai. The second, Thyagarajan (Arun Vijay), operates his business in Dubai with Arabs. The third, Ethirajan (Silambarasan), runs the Serbian section of Sena’s empire.