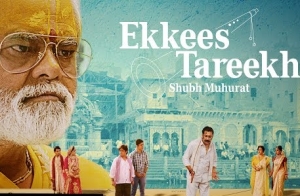 It is a story of a 55-year-old man Pandit Girdhari Laal Sharma who wants to escape his family legacy of becoming a priest and aspires to become a storyteller instead. His reality is that he is stuck trying to find a date for his daughter’s wedding. What follows is a series of unfortunate events which land him in jail. His dream starts unfolding in the most unexpected way as his stories find an audience amongst the prisoners.

This is supposed to be a comedy of errors where an average priest and his family are caught up in a series of unfortunate but funny events. But Ekkees Tareekh… suffers gravely from lackluster writing and shoddy storytelling. The worst part of the film is the editing, which makes the scenes look like they were stitched together in a tearing hurry.

The comic and dramatic talents of Sanjay Mishra are wasted in this random and incoherent film. The critique and satire on the arranged marriage system in India also fails to deliver.