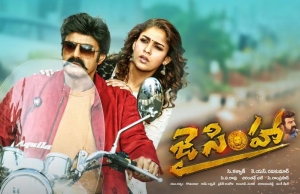 The film starts with Narasimha (Balakrishna) traveling across Karnataka, Kerala looking for peace with his son and ends up in Tamil Nadu after finding the places not suitable for raising his son. In Kumbakonam, he visits the temple on Radhasaptami day looking for a job. The priest is unintentionally touched by the baby who picks up a discussion with Narasimha and it is ended by the temple secretary Murali Krishna (Murali Mohan). The temple secretary then offers a job to Narasimha at his house as a driver. There are around 12 workers in the house along with Narasimha, Santhanam (Bramhanandam) and his wife (Priya). Meanwhile, the city kingpin Kariappan (Prabhakar) meets up with the ACP (Sekhar) who is sincere yet corrupt and arrogant. One day the secretary daughter Dhanya (Natasha Doshi) drives home taking drugs and catches the attention of Narasimha. The next day Kariappan and his men create a ruckus explaining that the car that Dhanya drove last night created an accident and his brother was the victim and he is out for vengeance. Narasimha takes the blame and gets beaten up which makes Dhanya fall for him.