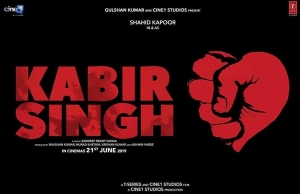 KABIR SINGH is the story of a heartbroken man on the path of self-destruction. Kabir Singh (Shahid Kapoor) is a top ranked medical student from a Delhi medical school. He is hot tempered and once during a football match, he gets into physical altercation with a rival college student named Amit (Amit Sharma). The college Dean (Adil Hussain) asks him to tender an apology or else he’ll be fired. Kabir choses the second option as he’s of the opinion that he did no wrong. But in no time Kabir changes his mind after he sees the first year student Preeti (Kiara Advani). Luck favours on him as Preeti’s family is family friend of Kabir’s and he’s asked to take care of her. Kabir is much feared on campus and he starts to give her personal lessons. Preeti enjoys this attention and soon they begin a romantic relationship. After their course ends, they move back to their respective residences in Mumbai. Kabir’s brother Karan (Arjan Bajwa) is getting married and Kabir goes to Preeti’s house to pick her up. Things turn awry here as Preeti’s father spots the lovebirds cosying up to each other. In a sudden turn of events, Preeti is compelled to get married to one Jatinder and Kabir is unable to stop this union. What happens next forms the rest of the film.