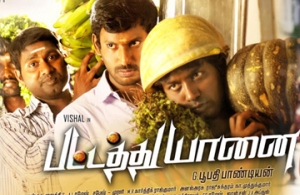 The story opens in Karaikudi, where Gouravam (Santhanam) is a well-known traditional cook making a living undertaking orders for marriage functions. He is forced into taking an order for a local goon’s wedding and is not happy about it. Saravanan (Vishal) and his four friends, who come to work for him as junior cooks, offer to help him but land him in even greater trouble and they are forced to flee from Karaikudi. The story shifts to Trichy, where Saravanan and his friends have grand plans of opening a restaurant with the help of Gouravam and his money. Here, just like in Malaikottai, it is love at first sight for Saravanan when he sees Aishwarya (Aishwarya Arjun). Things go wrong and as their love deepens we are introduced to two rival gangs, Kasi and Manaa along with a ‘Madurai Anachi’ who are constantly at each other’s throat. In a conflict Manaa forces Aishwarya to marry him and in the process of saving his love Saravanan reveals his past. Saravanan is a jail return who had killed three people in Madurai including Anachi’s only son to avenge the murder of an orphan kid whom Saravanan considers as his little sister. The rest of the story is how Saravanan protects his love and kill the dark forces.